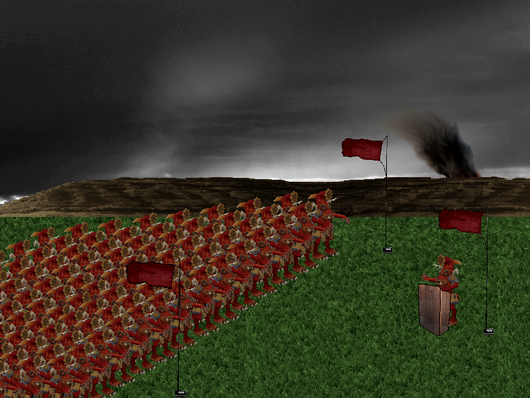 The Red Speech occured in The Kalva Nation on Laktra in the Ixra-system on the solar date 38.0
The government changed position from a social-democratic position and became communistic..

The Red Speech:
"Workers of Kalva, one cannot be rich while another lies in the corner of a road. One cannot look down on another, because that one was born with better genes or had better parents to teach the person how to be and behave. This shouldn't happen anywhere on Laktra! But if we look upon the reality, out from our dome, it is happening! Mostly in horrible countries like The Blue States, but also in our very own country! We need to stop this!
How can anyone think one is superior to another? How?! The People of Kalva, The People of Laktra, I am asking You to become equal! The government of The Kalva Nation will no longer allow such horrible things to happen, as what happens right now! Better days are right in front of us, as a country that likes it's people - all of them! As a union that cares for everyone!"

Retrieved from "https://yoursolarsystem.fandom.com/wiki/The_Red_Speech_(Ixra_c)?oldid=5277"
Community content is available under CC-BY-SA unless otherwise noted.