This planet it the Tripe's home. They were once united, and broke into two nations, eventually breaking to 4.

The Tripe Union was formed on solar date 20.7. It launched probes into space with an unkown space program, starting on the solar date 35.6. The citizens of The Union lived happy together until a fraction wanted to change their Ways. They had an emmense battle about the Ways until it broke up into two nations. The Union broke into two on 50.1 after a long civil war on rights. The Union, allied with NoP, helped defend from Kryllm, sending Kryllm to attack them. Also on 51.5, Roakin broke from the Union. On 51.6 Sirm declares independence from the union because "they wanted thier own country". On 52.9, Bihijir declares war on the Union. On 54.0, the Union was half defeated from the war with Bihijir.

The OFS were formed on solar date 35.4. Their government and their citizens think much differently than the Union, and think all life but them are unworthy. This hatred of beings other than themselves started out when they as an union found life, but didn't wan't it, and now they think only their nation should survive. On solar date 49.9 they waged war on the Star Nation. This nation bombed the Union and Nation of Peace on 50.1, waging a World War, starting the First World War... That day, Hurricane Selester took down a fleet going in for attack, crossing over the "Wide" Ocean. On 51.5 the OFS falls to a pandemic of Epihiphil Flu, a not-so-flu virus that they ran out of vaccine for. Neighboring states refused to give the materials needed for the vaccine.

The Star Nation was formed on solar date 35.9, when people didn't think differently, and they thought they should make friend with all life. But, rather than going to the Tripe Union, they want their own space nation, and formed the Star Nation. When they broke, the OFS didn't react, which is very abnormal for them. They formed a Hurricane Center for Tracking (HCT) and created a name list on 50.1. See this article for the hurricanes. On 50.1 the Star Nation's Space Agency, named the planet, Korris, and thier star, KM-56. The HCT started to observe the hurricanes, but did not made predictions, as they were still learning how weather works. On 51.5, they began issuing predictions on Tropical Storm Ahnroykha with their basic knowledge. Star nation's probe destined for Ixra (KM6), failed on 51.5, just as it was arriving in the system. Horror falls out to every citizen of Star Nation. Star Nation's RFTS program launches the CoSGeoPhyMCI probe to CoR59 on 51.6. Also that day, the wealthy Star Nation buy out Kryllm, then sell a different portion of land to Roakin. On 51.8 Roakin allies Star Nation, then they both establish meteorological agencies in all countries, designating them Regional Specialized Meteorological Agencies (RSMA). On 52.3, Star Nation finds the first galaxy outside theirs. Star Nation helps Roakin with the Union, in effort to help them from the recent devastation from the earthquake. On 55.4 Star Nation launched another mission to Ixra c (Laktra). It is expected to reach the system on 57.8.

The Peace Nation was formed on solar date 35.9, when they split from the OFS. They changed their Ways to never hurt a being. They do not attack any other nation. They tried to break free from the Federated States on 35.6 but didn't succeed until 35.9. On 51.5 thier capital city was lost from seige by Kryllm.

Formed on 50.1, Bihijir was formed from a civil war in the Union, that started on 43.0 fighting for rights of citizens. They split later to form Kilik. On 55.3, Bihijir declares war on the Union.

The Kilik formed on 51.0 (Christmas Day (our time)), when they broke from Bihijir. On 52.1, Kilik bought land from Bihijir.

Roakin formed on 51.5 when they believed citizens should have more rights. They established a minor facility to start Solar energy. Roakin recieves gift of land from Star Nation. On 51.7, Roakin established a National Weather Service and Hurricane Center. On 51.8 Roakin allies Star Nation, then they both establish meteorological agencies in all countries, designating them Regional Specialized Meteorological Agencies (RSMA). On 52.3, Roakin discovers the largest prime number yet. On 54.7, Roakin was devistated by a 3.2 on the Kfiasu scale, devolped on 54.9 to measure "kyrri" or, earthquakes. Star Nation discovered that the rock moved because of pressure on 55.0. The death toll had reached 752 on 55.3. Bye the time they had started to recover on 60.2, they had reached a large death toll of 3,482 Tripes.

Sirm declared independance from the Union on 51.6. Remnants of Hurricane Quirik (Qrit) made landfall as a category 2 in Sirm, killing 400 so far. 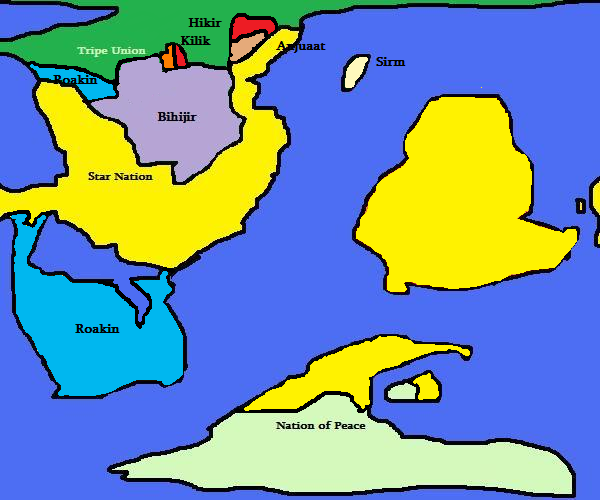 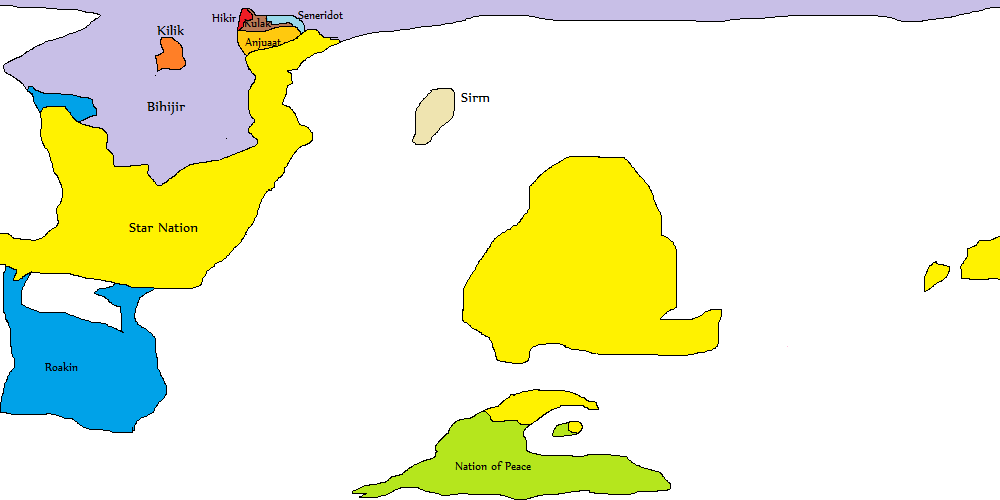 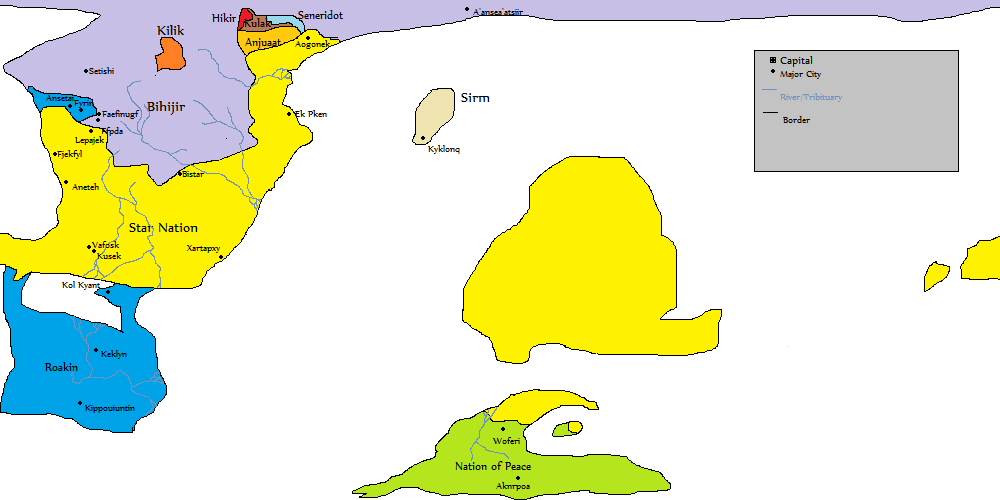 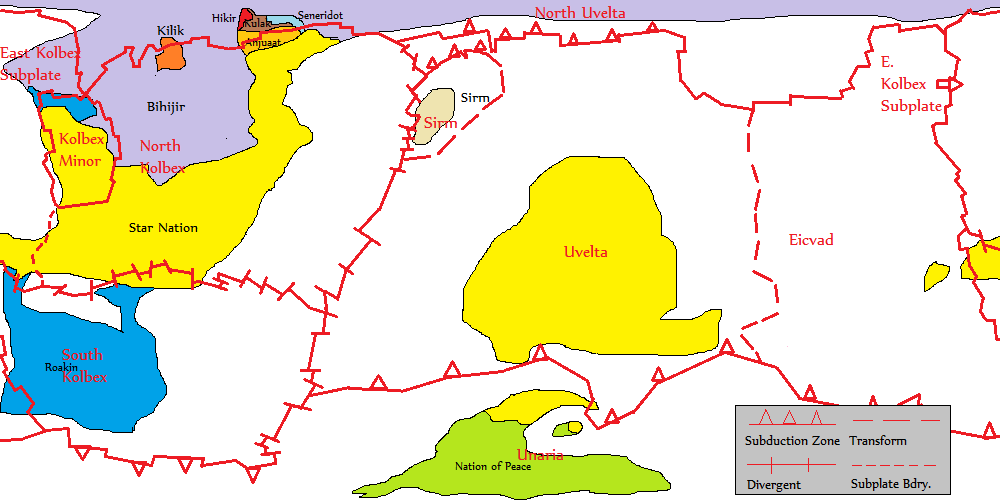 Retrieved from "https://yoursolarsystem.fandom.com/wiki/KM-56_b?oldid=12073"
Community content is available under CC-BY-SA unless otherwise noted.